Today I?m going to talk about something very close to my heart. That something is why Lorgar did nothing wrong.

?Traitor? I can hear the imperial loyalists scream. But hang on, make a nice brew or glass of your favourite beverage and let me take you on a journey of the mind and more importantly the heart. #emotions

The whole Lorgar story, is a story of wanting acceptance and a feeling of belonging. Lorgar wasn?t blessed with the same gifts as his brothers, such as OMGHESHAWT Sanguinius, Mind bullet Magnus or Lego Builder extraordinaire Dorn. No, Lorgar had a much more subtle gift. The gift of inspiring devotion. Much like his Father.

And this is where the need to be accepted fits in, you see? Lorgar wasn?t the OP bullplop I win button to be deployed like his brothers. Lorgar was meant to inspire faith in the Emperors vision.

Unfortunately he was ?adopted? (Read ?Lorgar? from the Horus Heresy Primarchs novels to see why his adoptive dad would certainly not get past an interview) by a Saturday cartoon villain. And his real dad, (if the Emperor can really be seen as a father at all considering his attitude to his home grown test tube miracles) fails to notice this. Like, completely fails to acknowledge the creepy guy who has been whispering various bad things to his son for years. 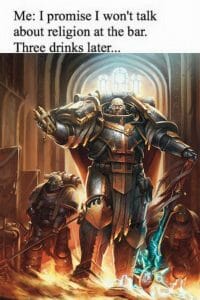 But Lorgar, bless his, he?s right sound, ignores creepy father Kor Phareon and just does what the CHAD Emperor wants. He goes out and conquers worlds and makes them magnificent centres of human civilisation. Fully in love with the Imperium and the Emperor.

The problem is Lorgar spends too long doing this (as if taking the effort to create loyal societies is a waste of time but I digress) and the Emperor goes, ?speed up for god my sake? but much more regally. He also tells Lorgar to stop worshipping him. Despite the fact Lorgar has had dreams throughout his youth of the coming of the Emperor. Prophetic dreams. Where he burned in warp-fire and endured agony.

Realistically the Emperor should have sat him down and explained this as Lorgar?s latent psychic potential. But that would make too much sense!

Now, here is where Lorgar could receive some criticism. He doubles down on the whole worship thing trying to spread it to anyone who will listen like some super preacher. He also continues to conquer planets but at a slow pace.

So as any cultured gentleman/lady knows this is how we arrive to Monarchia. Monarchia is called the perfect city because of how lovely the Word Bearers have made it. Everyone is extremely loyal to the Imperium and loves the Emperor. What does the Emperor think about this? Well..

The Emperor gets the Ultramarines to Nuke/orbital barrage the city. For giggles. The only redeeming factor is that they evacuate many of the citizens. Only after some say they don?t want to leave so they get boltered into red paste.

They send a distress signal to the Word Bearers. Who travel at maximum speed, losing ships and men to the warp in the process. When they get there they see a brother Legion above the destroyed city. Grim.

Now, the entire Legion heads down to the surface of the planet, where Malcador the Emperors Regent, Big Bobby G and a few Ultramarines are waiting.

Lorgar is understandably a bit miffed. Even more so he?s absolutely livid. They try explaining the reasons for it to him but he doesn?t have time for their absolutely dogplop excuses. He backhands Malcador, who takes it like a champ considering he?s a geriatric dude and cracks Guilliman’s breast plate. Safe to see he?s lost the rag a bit seeing his perfect city roflstomped

So he demands they go tell Dad what they?ve done.

But plot twist! He?s been on his space ship above all along. He teleports down and makes the entire Legion kneel with his mind powers. He then berates them all, like they?ve stole the last bag of crisps. 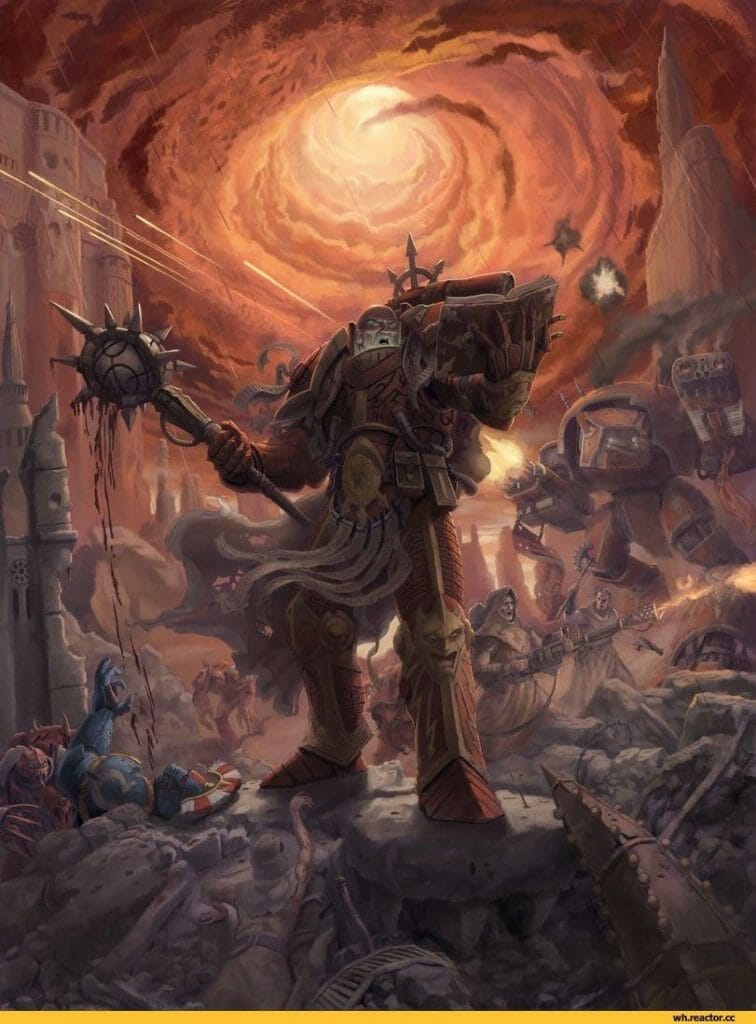 They?re all heartbroken that the object of their devotion has just laid a big fat pile of despair on their heads. Even worse, a brother Legion witness it, standing at Big E?s side. As if to contrast them with the kneeling Word Bearers. But that?s a whole other can of worms.

So, after his entire belief system has been shattered and the man he loves the most has just essentially left him on read on Facebook messenger after he called out to him you can understand why Lorgar is upset.

Then the sly Kor Phaeron is there. Waiting in the wings like a hangover after a session. ?I kNoW oThEr GoDs? he coo?s. ?TrUsT mE? he whispers as seductively as he can for a cliche villain.

Lorgar is angry at first but comes round. Lo and behold, he finds these Gods and even though he realises they aren?t worth worshiping as they?re bloody awful he realises these are the Gods he has. After his Father has told him their is none. It?s a lot easier to accept lies for evil beings when they can convince you your dads a great big fib. Cause he is.

Lorgar then sets the Horus Heresy in motion and we get the setting we love.

If you have stuck with me this far, hopefully you have realised that actually, Lorgar is a very sympathetic character in his own right as it?s the fact his Father is unable to understand him that leads to him becoming the ultimate rebel by doing something his Father is entirely against. What an absolute Lad.

This is the first of my blogs and if there is enough interest, I will write more.